There is a warning in a recent Inner House decision that people should be very careful about what they agree in a Pre-nuptial or Post-Nuptial agreement. 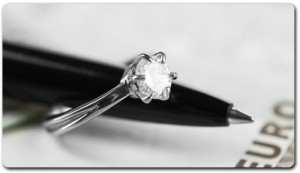 The purpose of each of them is broadly the same – to make a binding and enforceable arrangement about money and assets without having the details imposed by the court. Scots Law has always encouraged parties to reach their own agreements if possible, subject to the protection (s16 of the Family Law (Scotland) Act 1985) of the party who has been disadvantaged by the terms of an agreement which was not reasonable when it was entered into.

The recent case emphasises how difficult it can be for anyone to overturn their agreement in circumstances in which there was the opportunity to take legal advice, even if the advice was not followed.

The recent case emphasises how difficult it can be for anyone to overturn their agreement in circumstances in which there was the opportunity to take legal advice, even if the advice was not followed.

In the recent case the husband and wife entered into an agreement whereby the husband paid the wife £60,000 in full and final settlement of any claim she may have on any of the matrimonial property. It seems likely that the deal was a very poor one from her point of view. The wife had the opportunity to take legal advice and did in fact consult a solicitor who was wise to put in writing the fact that he advised her against signing the deed as it stood. She claimed that the husband had subjected her to abuse and pressure to make her sign the deed and had failed or at least delayed to disclose some of his assets.

The court said that in the absence of other relevant circumstances which might include evidence of poor mental health affecting cognitive ability, of one spouse taking unfair advantage of the other’s vulnerability, or of a lack of poor legal advice, neither a very unequal division of assets nor a poor state of mind gave rise to a necessary inference of unfairness or unreasonableness for the purposes of Section 16 of the 1985 Act. The court found that the wife had suffered from a moderate depressive illness but said that that could not be determinative since she had received sound and proper legal advice and chosen to act contrary to it.

The message is plain that the bar is set quite high for anyone who tries to set aside the terms of a formal legal agreement, especially if they have received independent legal advice, whether or not they have chosen to reject it.

Pre-nups…The Scots have had them for ages!

They do things differently there…